Born in Rhode Island in 1848, Katherine Greene Spencer sailed from New York to California when she was 16, to join her father who had come out for the gold rush. On the ship she met Elisha B. Smith, a mining engineer, and they were married a year later in San Francisco in 1865.

E. B. Smith and his sister acquired Lapham's hundreds of acres of land straddling the California-Nevada state line, and rebuilt the hotel as the Lakeside House, with cabins and campgrounds in the surrounding Lakeside Park resort.

Following the death of E. B. Smith's sister, Marian Smith Hill, her son, Arthur Marion Hill, helped run the Lakeside Park resort with his uncle and aunt, E. B. and Katherine Smith.

After E. B. Smith died in 1904, his widow, Katherine, married his nephew, A. M. Hill, consolidating all of the Lakeside land holdings on the South Shore. After A. M. Hill's death in 1913, Katherine Smith Hill was the sole owner of the land on both sides of the state line.

In the 1920s, she donated the Nevada land along the state line northwest of the highway to the Episcopal church to build the Camp Galilee summer camp. (Two decades later, the church would sell the land to Harvey Gross, and move Camp Galilee to a more secluded spot near Glenbrook.)

Her Nevada land passed through a number of owners, and eventually became today's Harrah’s and Harveys. Her California land became the Lakeside Park Association, one of the first subdivisions in South Lake Tahoe.

Katherine Smith Hill died in 1939, and is buried with A. M. Hill in the Al Tahoe pioneer cemetery.

The family is memorialized today in the name of Hill Road, off Azure Avenue a block west of Stateline Avenue. 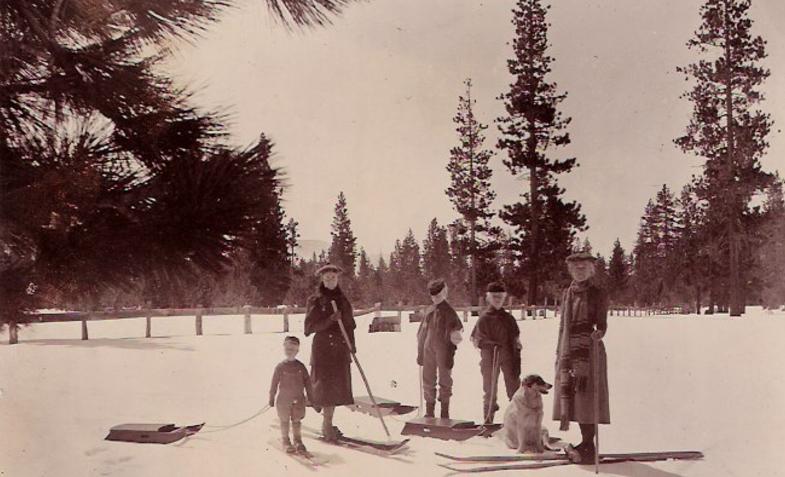 Florence Hill Cotrel (daughter of Marian Smith and Thomas Hill) is seen at left with her children, Wilbur Cotrel and twins Lillian and Marian Cotrel, and her aunt (and future sister-in-law) Katherine Spencer Smith, around 1897.