On February 14, 1844, John C. Frémont became the first American to record a sighting of Lake Tahoe. Frémont named the lake "Lake Bonpland" after Aime Jacques Alaxendre Bonpland, a French botanist and explorer. Charles Preuss, Frémont's cartographer, had a different idea and labeled the lake "Mountain Lake" on his map of the expedition.

In 1853, the California Surveyor General named the lake "Lake Bigler" after the third governor of California. In 1870, Lake Bigler became the official name.

In 1860, Judge Seneca Dean and Van Wagoner, owners of Lake House (just down the road from here) and devoted supporters of the Union cause, took great offense at the naming of the lake after a Confederate sympathizer. Dean and Wagoner took on the cause to rename the lake "Lake Tahoe". Dean and Wagoner secured a post office in the name of Tahoe and encouraged the founders of a new town on the north shore to name the town "Tahoe City."

The name, Lake Tahoe, took hold but would not become official until 1945, when the state legislature officially changed the name from Bigler to Tahoe.

As we look out at Lake Tahoe we have an opportunity consider how Lake Tahoe was created and how the lake got its name.

Geologists believe the basin was formed about 10 million years ago when the Sierra Nevada and Carson Ranges lifted and the land between them sank. Glaciers came and went leaving behind what would become Emerald Bay and Fallen Leaf and Cascade lakes. The Truckee River formed to drain the basin. Then, about 2 million years ago, Mt. Pluto, a volcano located where Northstar Ski Resort is today, erupted. Debris from the eruption blocked the river's northward flow out of the basin. The basin filled to a depth about 600 feet higher than it is today and formed the lake. When the lake reached the top of the debris dam it began to overflow and eventually eroded the Truckee River canyon and lowered the lake to its current normal elevation of approximately 6,224 feet above sea level.

To give the size of the pre-erosion lake some perspective, consider this; Harrah's Hotel at Stateline is approximately 18 stories high. 600 feet is equivalent to about 60 stories. The lake would have been as much as 42 stories higher than Harrah's. Additionally, the lake at its fullest would have extended all the way to the southern end of Christmas Valley. The avalanche control gun on Highway 50 south of Meyers, at 6625 feet above sea level, would have been underneath the surface of the lake.

The Washoe have a different take on the lake's origin. Way back before there was a lake, a Washoe teenager lived in a meadow near today's Glenbrook. He lived a good life but was continually harassed by an Evil Spirit. A Good Spirit took pity on the lad and gave him a tree branch. Any time the Evil Spirit approached him he was to drop a piece of the branch to the ground and a pool of water would block the advance of the Evil Spirit. With the branch in hand, he headed off across the basin.

It wasn't long before the Evil Spirit was in quick pursuit of the teenager. Seeing the Evil Spirit rapidly approaching and wanting to be sure to stop the spirit, he tossed the majority of the branch to the ground, saving a smaller piece. Immediately, a large lake formed (Lake Tahoe!) blocking the Evil Spirit's advance. The teenager continued on his way west, dropping small pieces of the branch along the way forming Fallen Leaf Lake and others in the Desolation Wilderness.

So, you get to choose the version of Lake Tahoe's creation you prefer, but the story of the Lake's naming is more concrete.

The Washoe had been calling Lake Tahoe "Da ow" since the beginning of their time. American settlers, thinking Da ow meant "Big Water," began calling the lake "Tahoe," an Anglicized pronunciation of "Da ow," but it took a while for the name Tahoe to become official. 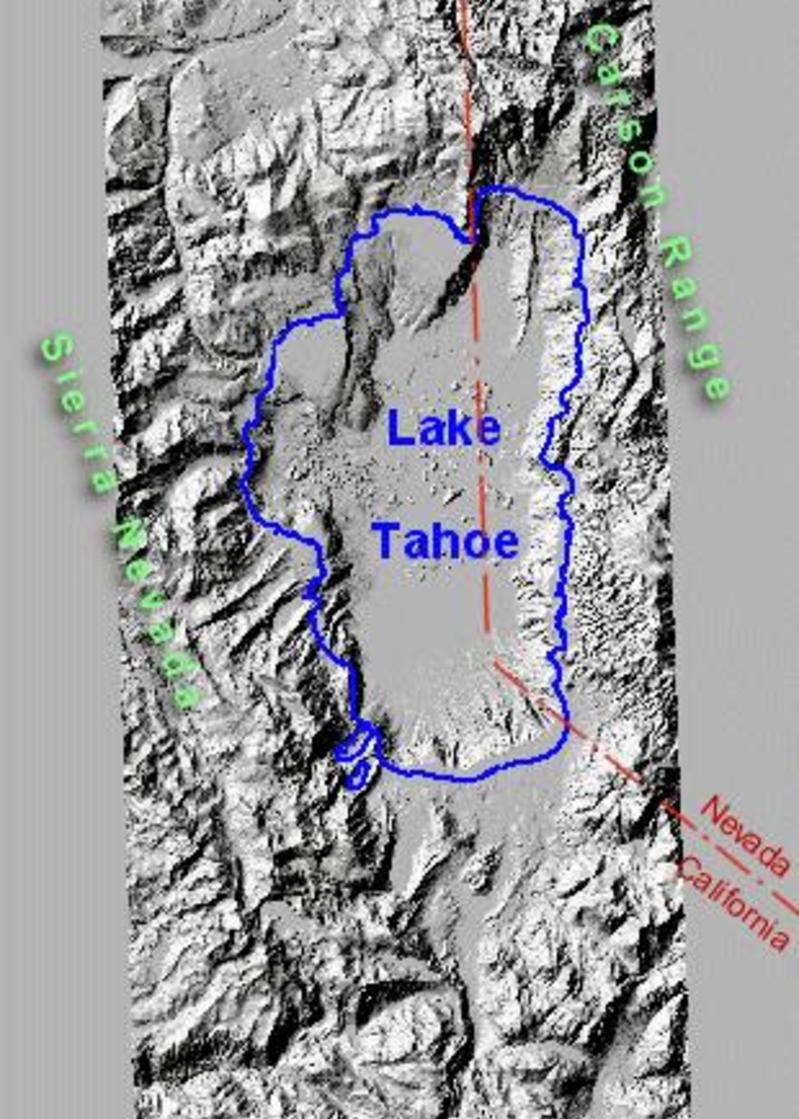 Regan Beach as you see it today was constructed in the mid 1960s. The bulkhead was built to protect the shoreline from erosion caused by waves. In 1967, Lake Side Beach, as it was formerly known since 1947, was renamed Regan Beach after longtime Tahoe resident, Thomas F. Regan. Regan was president of the Lake Tahoe Rotary, a member of the County Planning Commission, a trustee of Barton Memorial Hospital, El Dorado County representative to the Lake Tahoe Bi-State Study Committee, and president of the Lake Tahoe Area Council (the predecessor of the Tahoe Regional Planning Agency).