This is the site of the Al Tahoe Inn. It was built in 1907 by Almerin Sprague and quickly reestablished Al Tahoe as the place to party at Lake Tahoe. Almerin, better known by his nickname, Al, tacked “Al” onto Tahoe and created the Al Tahoe name for the entire neighborhood, even though Sophronia Rowland and Fannie Barton, another early Tahoe pioneer, still owned Al Tahoe land. The name was forever attached to the neighborhood in 1908 when a post office was established in the name of “Al Tahoe.” 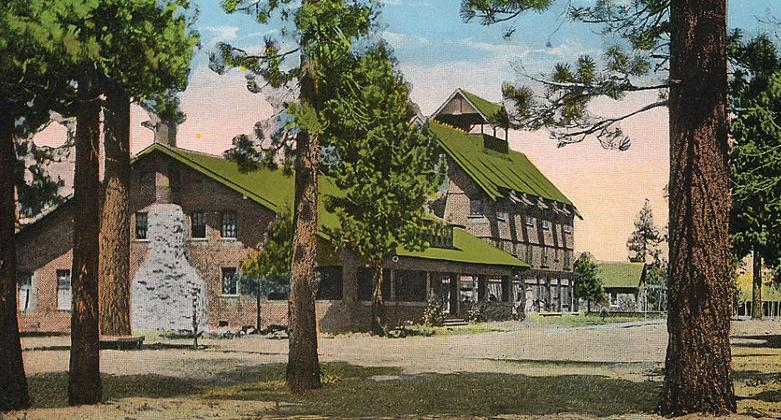 (WEST SIDE OF SACRAMENTO AVE.,
BETWEEN ALAMEDA & TALLAC AVENUES)

In early 1908, the Al Tahoe Development Company owned the former Rowland real estate and assumed management of the Al Tahoe Inn and Water Company. The development company was managed by W.J. Wallace; it is unknown to this writer if Al Sprague was still involved in the company. The Al Tahoe Development Company extended the pier Al built at the end of Sacramento Avenue out to deep water so the many steamers that plied the waters of Lake Tahoe could deliver mail, supplies, and of course, vacationers to the hotel.

The Al Tahoe Inn stood at this spot until the 1965 when, after many years of abandonment it was finally demolished and its furnishings sold at auction. All that remained of the grand Al Tahoe Inn was its stone fireplace which has also succumbed to time.

The mural (shown below) on the San Francisco Avenue side of the old Tribune Building (now the Mountain Lab), 3079 Harrison Avenue, depicted the Al Tahoe Inn in the early 1900s during the Al Sprague / Al Tahoe Development Company era. It has since been partially removed from the building.